To be honest, growing up we didn’t eat a lot of salads. It may be because we didn’t really know how to make a good salad. The french however know how to make a good salad. Perhaps that’s how they stay so thin…. Originating from the city of Nice, in the south of France on the Mediterranean, the nicoise salad has so many components that it doesn’t seem like you’re actually eating salad. That may be why I love it so much!

There is quite a bit of debate over what should be in a salad nicoise. Some purist argue that there should only be anchovies, tomatoes, green peppers and never potatoes. I beg to differ. Tuna wasn’t actually added in to the norm of ingredients until the 19th century which is quite amusing. When I think of salade niçoise, the first thing that comes to mind is tuna.

For many of you, there is no need to tell you who Julia Child is. For those of you who are unfamiliar with her, she was an American who moved abroad after WWII, studied at Le Cordon Bleu Paris (aka my dream school) and wrote a thorough cookbook on la cuisine française. After returning back to the States, she went on to become an iconic figure in households across America, thanks to her cooking shows on TV. If you want a quick intro into her, Meryl Streep (in my opinion) portrayed dear Julia fantastically in the film Julie & Julia. For those who want a bit more information on her time in France, I would strongly suggest reading her autobiography My Life In France.

I have personally always felt a sort of kinship with Julia Child. Maybe it’s the fact that we both have the same maiden name, or perhaps it’s simply our shared love for France and french cuisine. Whatever may be the reason, when I find myself in a rut, I always look to Julia Child for guidance and fresh ideas.

As for most salads, it’s vitally important to choose the best produce you can, to make sure that all of the ingredients stand out. For Julia Childs recipe, she uses

I didn’t want to change her recipe too much. However in the end, I didn’t end up using all of the ingredients in her recipe. Personally, I’m not a fan of capers nor anchovies. The capers were dropped all together and then I replaced anchovies with sardines. I also roasted pommes de terres rattes rather than slicing boiled potatoes for the potato salad and in the end, I prefer them over the traditional french potato salad.

For the dressing, Mr. Hubby and I both found the initial amount of olive oil quite over powering, so I brought down that amount, then upped the Dijon mustard. In the end, it’s become one of my favorite ‘hearty’ salads. 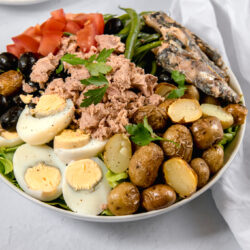