One of the lesser known french pastries, pains aux raisins are to be honest one of my favorite viennoiseries. Also known as escargot, due to the form or brioche aux raisins in the south of France. Pains aux raisins consist of a thin sheet of pâte feuilletée levée, onto which a layer of pastry cream is spread, topped with raisins. Then it’s rolled up and cut into thin slices. Once baked, they’re a lovely, flaky dessert with a touch of pastry cream and nice plumb raisins.

It’s also a nice way to continue to practice PLF (pâte feuilletée levée). To be honest, it’s exhausting making endless croissants & pains aux chocolats. Even if you’re not a fan of raisins, you can switch up the fillings. For one of my first CAP blanc, I filled them with a pistachio pastry cream and chocolate chips. Mr. Hubby isn’t a fan of raisins, so I generally make half chocolate chip and the other half raisins for myself.

As the base of this recipe is the same as croissant dough, you’ll start off with what we call the détrempe. In a mixer bowl, you’ll add all of the liquids and yeast, then cover it entirely with the flour. The salt and sugar are added to opposite sides of the bowl with the softened butter in the middle.

Once the dough comes together, you’ll let it proof for half an hour at room temperature and an additional half hour (or longer) in the fridge.

The lamination process is exactly the same as croissant dough. The détrempe should be rolled out to three times the length of the butter square. Place the butter in the middle, then fold the dough over the butter, enveloping it dough. With the rolling pin, press down on the open ends, to seal the the butter in.

Can I freeze them?

This is a question that is asked quite often. You can freeze them prior to the last proof. However, in this case, you should add extra yeast to your dough. The general recipe calls for 20g of fresh yeast. If you plan to freeze them, I suggest using 50g. Why? When you freeze yeast, some of it dies, making it less efficiant when you do need to proof. In professional bakeries, they up the yeast amount to counter this effect.

I also freeze pains aux raisins, croissants or pains aux chocolats after they’ve been baked. To reheat them, simply put them in an oven at 170°c for about 5-8 minutes or until warm throughout. This brings back some of the crispiness that the puff pastry has, which you will loose instantly if you reheat in the microwave. 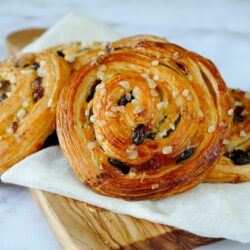 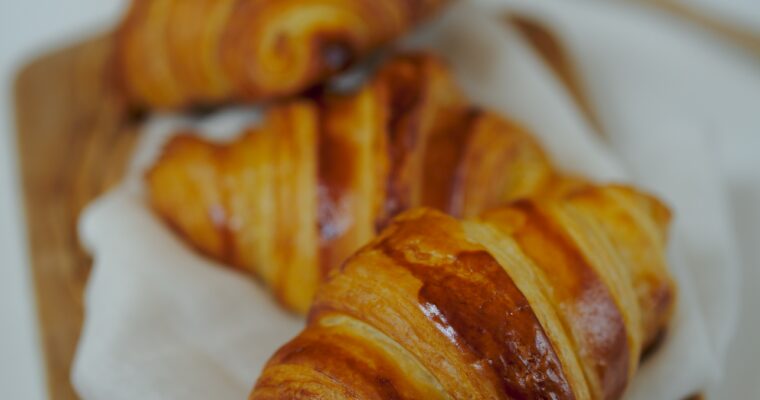 When I think of French pastries, the first thing that pops into my mind is croissants, but did you actually know that croissants weren’t invented in France? Croissants as we know them today, can be found from the 1840’s in Vienna, but of course they’ve […] 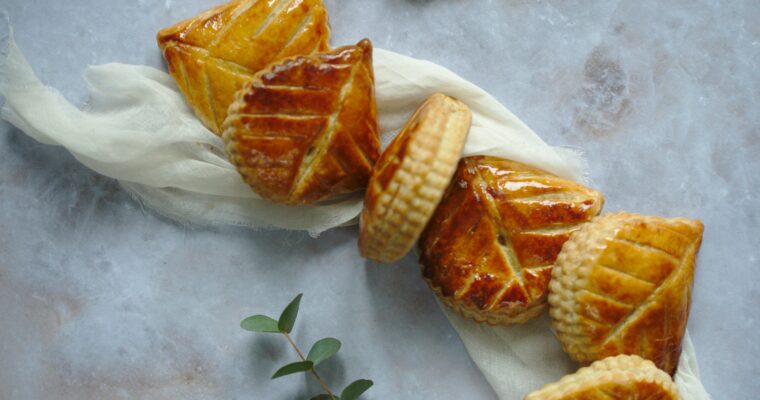 Chaussons aux Pommes are the french equivalent of apple turnovers. Personally, I feel that they tend to be under appreciated. When made right, they can be delightfully tasty and a great alternative to croissants or pains aux chocolats. For those just jumping into making puff […]